Racing was delayed for an hour as officials waited for a light 5 knot breeze to fill in on Day 3 of Townsville Yacht Club’s (TYC) SeaLink Magnetic Island Race Week (SMIRW); and finally, all but Division 1 yachts were on their way in the White Rock Race.

Once the other classes were clear, Division 1 boats started the first of their two short races. 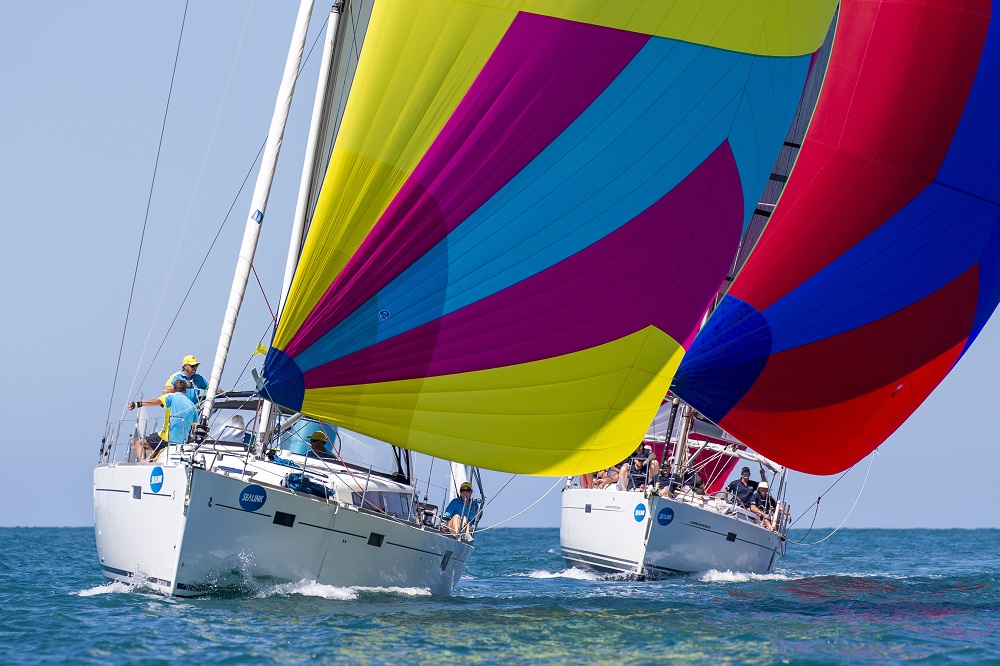 As the bulk of the fleet set shy kites halfway to the first mark, most chose to hug the Island’s coast. Barry Waugh took it to a new level, shaving the rocky shoreline on Kite Runner (NSW), tacking out in the nick of time each time.

“Blame it on Ian Ford, a cunning old man on board. He called it,” said Waugh, who is racing in Division 3. “We gained half a knot from hugging the shore. He knew how much water was under us, so we trusted him. We were a bit nervous though, because we chartered the yacht.”

Waugh said the most breeze they saw today was 9 knots. He has returned to Maggie Island, he said, “because the sailing’s great, the weather’s good and it’s laid back.”

In the Multihull class, Dennis Coleman, owner of Mistress, was regretting trading his son Nathan for a bag of lollies at this event last year. “In the end, we needed him more than the lollies, which is why we kept him this year.”

Just three sail the Corsair Sprint Mk1, but do so fairly successfully and are fourth overall after today – the top two are on equal points, as are third and fourth. “We’ve been to every Magnetic Island Race Week - on different boats. We keep coming back because we love it so much – it’s the Maggie spirit,” Coleman, from Townsville, said. 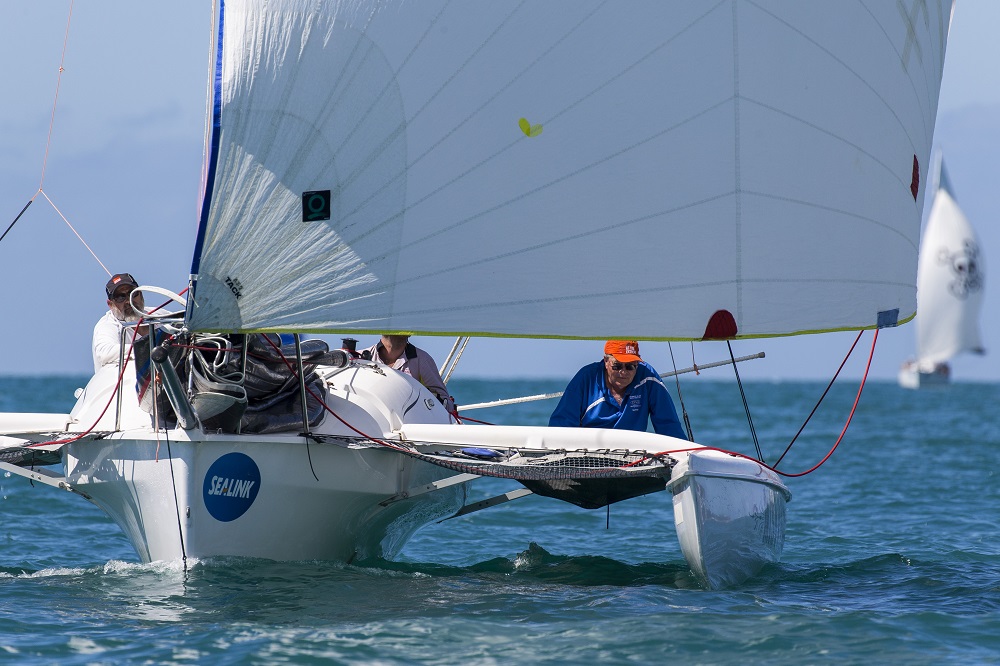 Mistress broke the start today. “We were being aggressive,” said Scott McInerney. “I had a feeling it might happen, so I started in such a way that we could return and re-cross quickly.

“The racing here is so good; Denis (Thompson, the PRO) makes it so easy for everyone to know what’s going on. He is a real professional and makes sure we all know what’s happening.”

Hughie Lewis, a Tasmanian who is racing David Currie’s Farr 40, Ponyo, in Division 1, also acknowledged Thompson’s professionalism. “Too often people complain about things, like their handicap, we forget to praise. Denis is a class act. He makes it so easy. Everyone gets clear and concise details on the water every day.”

Division 1 did two short races today, “one that had a bit of everything and then a windward/leeward,” Lewis said.

“We got good starts in both races; better than yesterday when we started too early,” he said laughing. “We got clear of Highly Sprung (Andrew Pearson/Adam Brown), but on the last bit of the work back to the finish, they caught us up a bit in some pressure on the shore. We took line honours, but I think they got us overall.” They didn’t; Lewis was second, her adversary third.

“The second race we led from start to finish, so I hope we did alright out of that,” the Tasmanian said. Ponyo was fifth in that race, and takes the Division 1 lead from Highly Sprung (NSW), and Tim Campbell’s Private Equity (Vic). Campbell, the son of eminent Tasmanian sailing journalist, Peter Campbell, won Race 4 today. But for an 11th in Race 3, he would have retained the Division l lead. 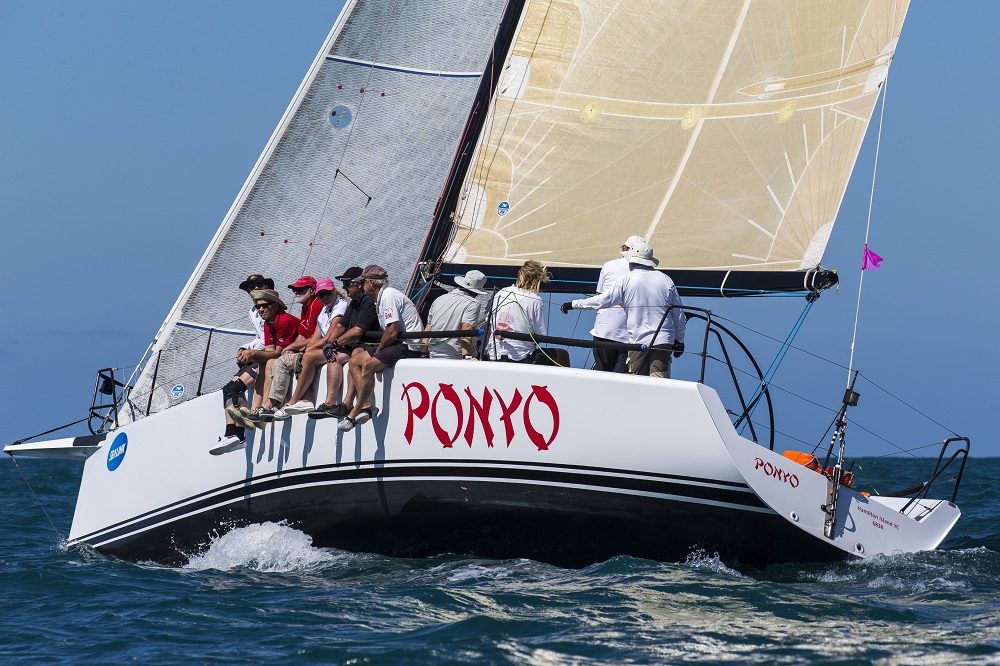 Meanwhile, Wine Dark Sea entertains competitors with a famous song every day. Today it was Tom Jones’ Delilah. While the voices leave a bit to be desired, the theatrics, led by skipper, Peter Lowndes, are impressive – a glass of champagne in each crew member’s hands. Fortunately, you could hear the distinct tones of Jones through the crew’s singing.

In spite of their post-race antics, Lowndes (NSW) is determined to win Division 2, having finished bridesmaid the last two times he was here. It’s become a pot boiler, with the top three boats on seven points apiece – and all are equally ambitious, including Lowndes.

Currently ‘Sir’ Robbo Robertson has moved into the lead with It’s Time. The Queenslander is ever competitive with a take no prisoners approach. Ian Edwards (NSW) with Wings is the other.  He is sitting pretty in second having finished second in Race 3. Lowndes is third. 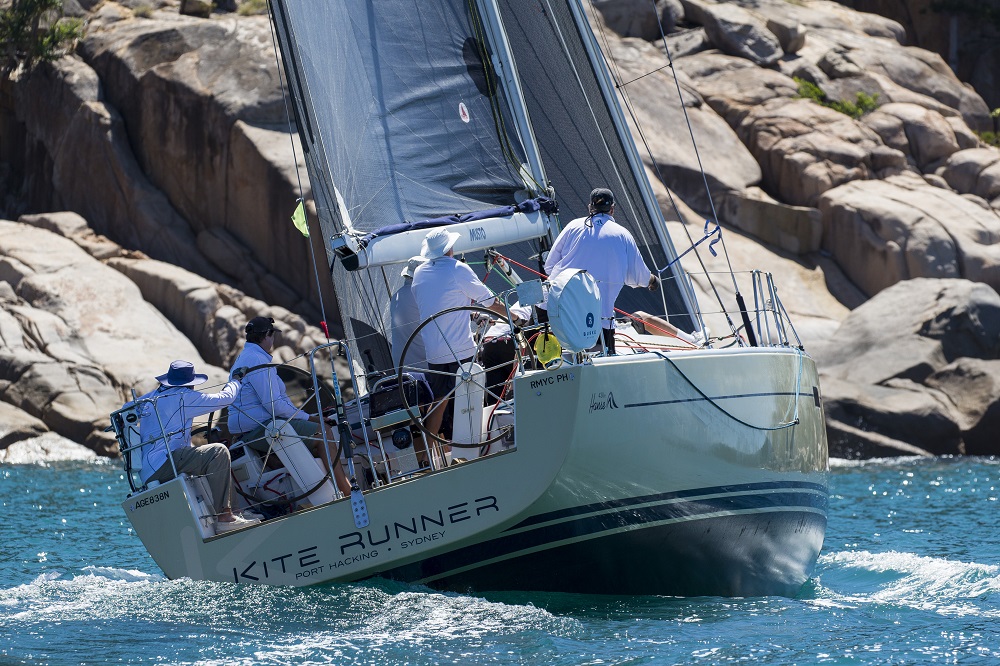